Two friends with half a century of real estate experience between them have just opened the doors of a new One Agency venture.

Rob Fuller and Colin McGill are taking their nous for the real estate market to the streets they know all too well.

“I was born and bred in Wagga Wagga and Rob has lived here most of his life,” Mr McGill said.

Mr Fuller and Mr McGill had known each other for more than 25 years, first meeting when they worked alongside one another at Coca-Cola.

Each went on to have separate, extensive careers in the realty world before joining forces in business to give the Wagga Wagga market “a crack together”.

Mr Fuller believed the difference in the kind of service they would be offering was found in the total commitment provided to customers.

“There won’t be any opportunity for us to become distracted, or be taken away (from our objectives) as there is no property management,” he said.

Mr McGill said he would be putting as much effort in Mr Fuller’s listings as his own.

“People have asked ‘how can just two people make it work’,” he said. “But the customers will get both of us.”

“They will be dealing directly with the decision makers.” 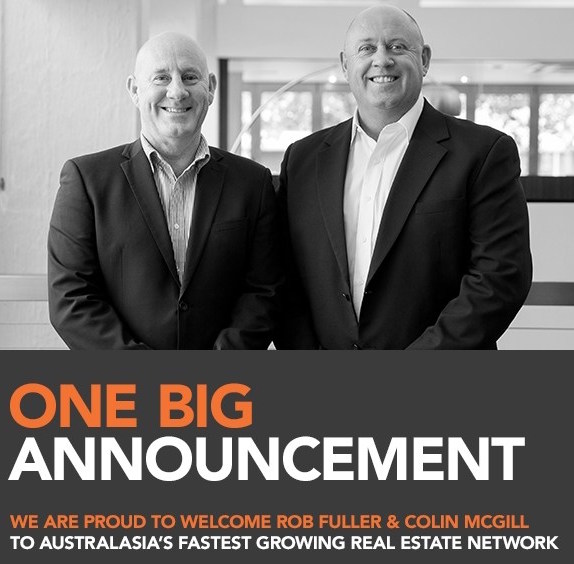 “Rob & Colin are the caring, problem-solving negotiators that we seek in our members and which the industry is crying out for as it matures into a profession”

“We’re delighted to welcome members of the calibre of Rob and Colin” commented One Agency’s Australasian Head of membership, John Stewart. “For a long time now, we’d felt Wagga Wagga was a market ready for One Agency, but had not met the right people,” he added

“Rob & Colin are the caring, problem-solving negotiators that we seek in our members and which the industry is crying out for as it matures into a profession.”

“Interestingly, a uniting feature of the over thirty new members we have welcomed into the group this year, by far the majority are offices;  franchise offices rebranding, independents seeking a brand that allows for continued freedom of local focus and , as with Rob & Colin, like minded senior realtors joining together to create an office,” Stewart added.

“Projections for the remainder of the year is for those trends to continue, although in recent weeks we’ve heard from a substantial number of very high-performing individuals who seek greater control over their pace, direction and market presence along with the chance to more than double their present incomes.”

This story was originally published by Property Noise Australia.